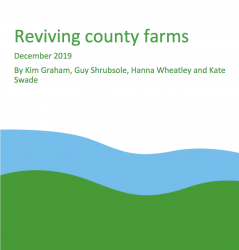 A new report, ‘Reviving County Farms’, has been published by CPRE, the countryside charity for England, in collaboration with the New Economics Foundation, Who Owns England?, and Shared Assets.

Owned by local authorities, county farms were set up originally at the end of the 19th century to provide a way into farming for young farmers. Over the years, however, as land has been steadily sold off, the extent of England’s county farms estate has halved in four decades, from 426,695 acres in 1977 to 208,994 acres in 2018.

Despite this trend, county farms remain one of the most powerful levers that a local authority has for directly helping new people into farming. They are a national public asset and as such they have real potential to support the economic viability of local farming and to promote innovative and environmentally sustainable farming methods.

We think they are also are one of the best tools we have to increase the amount of land used for the common good, by helping deliver a diverse, thriving and ecologically abundant farming system. And by taking more innovative approaches, such as providing smaller starter units for market gardeners and horticulturists near towns and cities, also build economic viability.

Headline findings: • The size of England’s county farms estate has fallen by at least 15,000 acres between 2010 and 2018 (a decline of 7%), with three quarters of Smallholdings Authorities (local authorities with county farms) selling parts of their estate since 2010 • Austerity – coupled with a sense that county farms are ‘a thing of the past’, and an unwillingness by some councils to innovate to develop new income streams or business models – is driving decline in the overall extent of county farms • Some councils have taken very different approaches, leading them to protect and even expand their county farm estates – viewing them as vital public assets providing social and environmental benefits, as well as an income source for the council • Seven of nine councils who responded to our survey gave details of environmental and social benefits provided by their county farms, ranging from tree planting, to local education initiatives, to supporting new entrants into the sector. However, other potential benefits, including procurement from county farms and community engagement in planning, were seen more as potential future avenues than current practices.

Farming in Britain is at a crossroads. Brexit offers a once-in-a-generation opportunity to reform the UK system of farm payments. Yet, the prospects of farming in the UK post-Brexit and a future free trade deal with the US represent existential threats to the economic viability of much of British farming. As the scale of the climate and ecological emergencies facing the planet becomes clear, farmers and landowners have a vital role to play in caring for the countryside and in so doing helping get the UK to net zero emissions and making more space for nature.

In this context, it makes considerable sense to re-examine the role our public sector – and the land it owns – has to play in supporting farming, and in particular, to reassess the value, future purpose and potential of county farms.

Key recommendations: ● The government should protect the future of the county farm estate by legislating for a ministerial lock on their disposal, and a rejuvenated purpose statement ● The government should bring forward a package of measures and new funding to enable councils to enhance their county farm estates ● All councils should promote the value of their county farms, their potential to help address the climate and ecological emergencies, and enable them to deliver wider public benefits to meet the needs of their community

If these recommendations are taken forward (some are being campaigned for via the Agricultural Bill currently making its way through Parliament), Shared Assets sees county farms playing a vital role in creating a system of land use for the common good – providing opportunities to help us meet the interconnected challenges of climate collapse, food sovereignty and local economic resilience.

Download the full report here and listen to our session on the Future of County Farms at January’s Oxford Real Farming Conference 2020, here.

We will be continuing to explore the issues raised by the research in more depth over the next year and would love to hear from people involved with County Farms in England - you can email us at hello[@]sharedassets.org.uk.