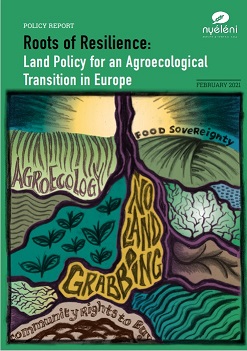 A collective of organisations, coming together under the banner of the Nyéléni Europe Food Sovereignty Movement have just released a new report : “Roots of Resilience : Land Policy for an Agroecological Transition in Europe”. The report argues for an approach to land policy in Europe based on a model of land stewardship and agroecology as key components of a sustainable agriculture model and resilient food system in Europe. Various pathways are laid out for securing this at local, national and European levels, including through opportunities provided by the new CAP, the European Green Deal, and the Farm to Fork Strategy.

Land politics – who controls what land, how is it used, for how long, for what purposes and to whose benefit – is a central pillar of this debate. As politicians across Europe struggle to balance the urgent need for climate action with the need to strengthen equity and popular support for new policies, the risk of societal discord looms large, fuelled by farmer protests, perceptions of ‘agri-bashing,’ and long-running tensions between conservation movements and agricultural communities. This has been made more complicated by the interweaving of questions of land and national identity and an apparently increasing disconnect between those living in rural and urban areas.

The COVID-19 pandemic has brought these issues into starker relief. As the health crisis has given way to an economic crisis, and degrees of suffering are fractured along class, race, gender and geographic lines, new attention is being given to questions of preparedness and resiliency as well as to issues of socio-economic justice and relationships of care.

This Policy Report argues that, to meet this moment, it is time to rediscover the roots of our resilience by grounding land policy in collective action and democratic forms of land politics. This is based on an understanding of land not as a commodity but as a common resource, a living territory and a natu-ral landscape. It corresponds closely with a philosophy of land stewardship : a deep and abiding relationship to land that is based on care-taking and an appreciation that land is held in trust, for now and for future generations.

In practice, this implies a different set of land property relationships and more diverse models of food production than those of industrial agriculture, which homogenises landscapes and cultures. This opens up the possibility for other land access regimes to emerge beyond simply that of the land market, including forms of common and collective land use and ownership. Patterns of land ownership and dis-tribution track closely with patterns of land use. Thus this approach to land politics also helps to sustain more ecologically regenerative models of food production such as organic agriculture and peasant agroecology as practised by many of Europe’s small farmers, fishers, pastoralists, and indigenous peo-ples.

Therefore, this Policy Report looks to support increased access to land for agroecology throughout Europe. This support is now more critical than ever in light of a number of alarming trends including increasing land concentration and land speculation, instances of land grabbing, the precipitous decline in the number of farmers and smallholdings, a generational challenge in terms of farm succession, massive biodiversity loss, a crisis in soil fertility, and the devastating impacts of intensive livestock breeding and industrial agriculture, to mention but a few. We thus offer up a number of policy recommendations geared towards policymakers at all levels in order to counter these trends and take seriously the goal of increasing access to land for agroecology in Europe.

Notes : Roots of Resilience : Land Policy for an Agroecological Transition in Europe is a collective document coordinated by European Coordination Via Campesina (ECVC), Terre de Liens, URGENCI, Eco Ruralis, the International Federation of Organic Agriculture Movements (IFOAM-EU), Real Farming Trust (RFT) and Transnational Institute (TNI), to which many allies and other organisations have contributed. It was produced as part of the Erasmus + partnership on Innovative Land Strategies.

The report is available in English, French, Spanish and Romanian.

Read the executive summary in English, French, Spanish and Romanian.