Peasant. Not a bad word but what does it mean? 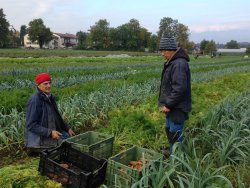 The word “peasant” is used in all sorts of ways to mean different things by many groups of people across the world. It is indeed very hard to define. This is particularly problematic due to the fact that the majority of decision-makers related to establishing agricultural policy at the national, EU and global levels don’t have an accepted reference point for understanding one another in a basic sense.

Often, the only time when self-ascribed “peasants” feel that they are accurately portrayed is when they explain what that word means to them. But, again, even they disagree based on cultural, historical, geographical and individual differences.

A peasant is a man or woman of the land, who has a direct and special relationship with the land and nature through the production of food and/or other agricultural products. Peasants work the land themselves, relying above all on family labor and other small scale forms of organising labor. Peasants are traditionally embedded in their local communities and they take care of local landscapes and of agro-ecological systems. The term peasant can apply to any person engaged in agriculture, cattle-raising, pastoralism, handicrafts related to agriculture, or a related occupation in rural areas. This includes indigenous people working on the land.

The term peasant also applies to the landless. According to the UN Food and Agriculture Organization (FAO 1984) definition, the following categories of people are considered to be landless and are likely to face difficulties in ensuring their livelihood:

In the first session of the Intergovernmental Working Group on a United Nations Declaration on the Rights of Peasants and Other People Working in Rural Areas, an 18 page briefing paper describing Via Campesina’s definition of a peasant and many other historical and academic definitions were presented. Since this first session, participants in the above working group for the UN Human Rights Committee have struggled just to define what a peasant is and haven’t really come close to taking the next step to figure out what their specific rights should be because of this.

All of the work done on the global level in regards to peasant rights at the United Nations sessions is very relevant in an EU and national context as well. The EU has member states that send representatives to participate in UN working groups. Thus, EU and individual country’s officials must therefore naturally pay serious attention to the decisions taken by the UN because there may be obligations to adopt specific policies.

Implementation of the Common Agricultural Policy (CAP) of the EU is also greatly affected by how peasants are defined. To the Romanian national government, the word “taran” (meaning “peasant”) only refers to a person who practices subsistence or semi-subsistence agriculture. In other words, a person that only grows food for themselves or a bit more to sell in order to gain small profits for basic livelihood. In contrast, the word “fermieri” (meaning “farmer”) signifies a person that practices agriculture on larger farms using bigger land areas in order to make abundant profits.

To put this in better focus … some Pillar I CAP funding is designated for small farmers as part of the National Rural Development Plan (NRDP) of Romania. To the Romanian government, “peasant” is not an official occupation and therefore these people cannot receive CAP funding. Romanian peasants don’t even receive state social security payments even after a lifetime of hard work and feeding other people. To the Romanian government, “farmer” is an official occupation and therefore they are eligible to receive CAP funding. Pillar II CAP funding in relation to the NRDP says that only farmers who register their farms as agricultural companies will receive funding. These measures mean that “peasants,” those who have the least amount of money and need funding the most, will be systematically and completely removed from the eligibility process. This simply makes no logical sense!

Eco Ruralis supports the general definition of a peasant in Article I of La Via Campesina’s Draft Declaration on the Rights of Peasants – Women and Men. Although we don’t have members that fit every part of that exact definition of peasants (especially the part about fishermen and fisherwomen), we have narrowed down some general characteristics of our hundreds of peasant members. In Romania, these people almost never use more than 100 hectares of land for agricultural purposes and the vast majority use less than 5 hectares. This is very important because we express that almost all categories of small farmers are peasants if they use less than 100 hectares of land, care about agroecology and are directly connected to the work done on their land.

Peasant members who use over 20 hectares are almost always pastoralists. Almost all of our peasant members solely own their land and a “gospodarie” (homestead / country farm home) which is located very close to their agricultural land. The majority sell at least some of their products directly to local community members or at nearby markets. They always consume their own food first before selling it if they do. Very few sell their products to stores but a small growing number of our peasants are getting involved with alternative food networks. Their farms have a diverse variety of crops and many use traditional seeds and adhere to the principles of agroecology. Many are not certified organic producers due to the bureaucracy and cost to get that designation but others stay away from this because they don’t think it is important or necessary. Our peasant members are very connected to their local communities and maintain pride in their cultural identity as guardians of a healthy food supply.

It is obvious that it is hard to come up with an agreed upon all-encompassing definition of peasants around the world due to such stark differences in rural communities and the interests of the actors involved in this process. In spite of this and in response to possibly fixing the problem of creating a global definition of “peasant,” it still may be helpful to explain in general terms what a peasant is usually considered to be in a specific country or region of a country first. This may actually help civil society and governments better understand the specific concerns and realities of people living in certain areas instead of grouping them all together and acting as if they all live the same way. It could be argued both ways: that peasants are different in different places yet share much more than they differ anywhere and need special recognition and rights for their invaluable work that feeds 70% of the world. This is evidenced by a report compiled by the ECT Group and backed up by the IAASTD report done by the UN. The ECT Group details that 12.5% of the world’s food comes from hunters and gatherers; 7.5% from urban-dwelling peasants; and 50% by rural peasants. Peasants may deserve more funding in some countries rather than others regarding the CAP but nevertheless they should all be given more rights that defend their land, seed and food sovereignty.

Although funny and a bit over the top, a scene from the movie “Monty Python and the Holy Grail” sheds accurate light on how peasants feel and the pejorative way in which the word “peasant” may be used. The video title is “The Annoying Peasant.” One thing is for sure, in the process of trying to define this important but loaded term, the voices of what people currently consider to be peasants, small-scale farmers and other people living in rural areas need to be directly heard and primarily considered.

So now … How do you define a peasant?