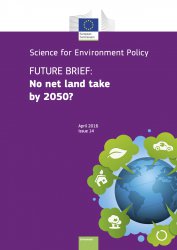 This reports was produced by the Sciences Communication Unit of the University of Bristol for the European Commission DG Environment. It stresses out the challenges to reach the comission target of ’no net land take by 2050’ into the EU and the numerous tools and solutions that can be implemented to reach this target.

Land and soils bring various benefits to our environment but are endangered by numerous challenges such as urban development. While it is rational that population growth can drive more land take, "since the mid-1950s, the total surface area of cities in the EU has increased by 78% while the population has grown by just 33%". It appears that land take should be contained due to its effects on environment (carbon emission, impact on rural aesthetic...) and its over-development related to its needs.

This report innovates by giving clear references and critics about the existing monitoring systems for land take and by offering various solutions to this problem. It recommends to avoid land take by recycling former used and/or sealed areas or by compensating any land take by renaturation or desealing areas projects. Policies can drive this change in land take thanks to numerous tools such as target settings. However, national strategy should be complemented by regional development policies to define goals and implement them locally.

An innovative proposition is drawn in this report by offering to prevent land take with brownfield development. Indeed, there are 3 million brownfield sites in Europe which can be recycle into artificial areas. This solution could preserve agricultural areas and favor access to land by reducing competitive pressures on its use.

As expressed in the report, "urban sprawl is a prime example of the tragedy of the commons. The benefits of using land go to a single citizen or commercial outlet while the detrimental effects are shared by society". To fix this issue, it concludes that the average land consumption by citizen should be equal to 1,6 square meter per citizen by 2020.

The report is available in English below or here : >http://ec.europa.eu/environment/integration/research/newsalert/pdf/no_net_land_take_by_2050_FB14_en.pdf]