Locavore is a social enterprise which exists to help build a more sustainable local food system which is better for Scotland’s local economy, communities and the environment. Their ambition is to use the money raised from food sales to achieve social and environmental gains by funding projects and education. Running since 2011, Locavore has been working to improve Glasgow’s food network by means of the production and distribution of ecologically produced fruit and vegetables, as well as education around food. They operate a shop, a veg box scheme and grow on three sites, totalling around 1.2 hectares, which are all within 10 miles of Glasgow city centre. They have a local focus on the Glasgow food network, but educate on the global impact of food including climate change, animal welfare, exploitation and workers’ rights. Locavore is explicitly anti-corporate and strives to create an alternative to the supermarket model which has dominated food production and sales in Scotland. It is a Community Interest Company.

Growing spaces The two smaller growing sites are in sheltered urban locations while the largest is on a windy hillside overlooking Glasgow. They grow using organic principles and the sites are in conversion to organic certification with the Soil Association. Management of the sites is intensive with several crops a year being grown in a bed system. Nearly all of the work is by hand and using traditional hand tools with a small amount using small machinery.

‘Left Field’ is the largest site at 1 hectare. The site is managed on a bed system with minimal digging, using a two wheel tractor with power harrow and rotary plough when necessary. The key crops at Left Field are kale, leeks, garlic, onions, carrots, beetroot, courgettes as well as salads and leafy greens and there is also a small orchard, soft fruit and polytunnel. 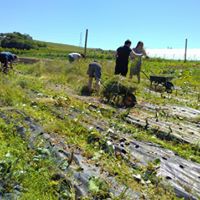 ‘The Croft’ is 0.2 hectare of mixed vegetable production used both as a productive market garden and as a site from which to give people experience of small scale organic horticulture through an education programme called ‘Grow the Growers’. The site is rented from Queens Park Bowling and Tennis Club and was formally tennis courts which had become overgrown. Also worked on a bed system, half are used as starter plots for people interested in learning to grow. This site is open to the public weekly to offer volunteering and informal training opportunities to local people. In addition Locavore also rent out part of the site to local charity South Seeds who let out small raised beds to people who want to try out growing for the first time.

‘Rouken Glen’ is the smallest site at 0.04 hectare. Former council plant nursery it has glasshouse and two polytunnels. The site specialises in making the most of the protected growing spaces to grow greens through the cold months and hot crops like tomatoes, chillies and aubergines through the summer.

Access to land Locavore is operating an urban model of ecological agriculture which utilises a number of small spaces around the city which combined proved vegetables and some fruits for their shop, veg-box scheme and some wholesale. Although the sites are small, they operate an intensive production model including covered spaces resulting in a high productivity per m2 of land. The sites are rented from local farmers or the local authority on short-term leases. They have a long-term plan to buy a farm near Glasgow once they have reached capacity on their current sites.

Locavore have found the short-term rental model suitable to their operation and have had no problem finding land which is available for rent with people getting in touch about further opportunities. As a result they have had to turn opportunities away as the organisation does not have the capacity for them. They have found the costs of renting land affordable which suggests that markets rather than the cost of land is the barrier in this setting.

The social enterprise employs three growers, one of which is a trainee. Between them they manage the urban spaces, and volunteering and training on the sites. Their sites are very visible and serve a strong educational purpose for an urban population showing people where food comes from and how it is produced. The promotion of food which is grown locally and using organic or ecological principals is primary to Locavore’s operation and they spend a significant amount of time engaging people in learning about the food system and how to grow food. This may reduce the productive output of the organisation, but has a strong positive social consequence. This included an urban pig project for which two pigs were raised in a city park and slaughtered under some protest from local residents, however there was widespread support for the meat production and it was all sold shortly after the pigs were slaughtered. 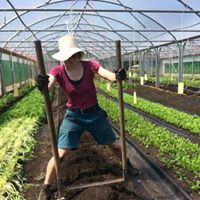 Locavore struggled to recruit growers with the ready skills for intensive horticulture with the result of some difficult years in getting their food production established. In 2016 their income was £21,000 from vegetables at farm gate price (roughly £40,000 at retail) which was close to breaking even. This is subsidised within the business via sales of produce from elsewhere giving a total enterprise turnover of nearly £500,000. Despite their small size, the sites are not yet at full production and Locavore expect that the growing component of the business to be unceasingly profitable as their team develops and infrastructure improves.

Locavore also has a focus on supporting new interest in food production by providing people with a 25m2 plot to develop their abilities and begin growing for profit. This is intended to create more growers in Glasgow who are producing food locally and ultimately reducing the city’s reliance on food imports which currently accounts for the vast majority of food consumed. This project has resulted in one participant going on to be a farmer for Locavore and another setting up an independent market garden to supply local markets.

Wider impact In addition to production, Locavore is very involved in the sale and distribution of food. which supports ecological agriculture through creating a secure market. They are currently launching the ‘Big Plan,’ which is to launch a large social enterprise grocery store on a scale to challenge supermarkets. The intention is to increase their market share and use it to shape a food system which is better for society and the environment. This will divert money from multinational corporations to be spent on employing local growers and developing educational and social justice initiatives. Locavore is raising money through a community share scheme… a bit more on the Big Plan.

One such initiative is the ‘Good Food Fund’ is an alternative model to traditional food banks to help people in the community who find themselves in the desperate situation of needing emergency food aid. The Locavore model uses cash donations to provide fresh food and store cupboard staples to those in need instead of the tinned products from supermarkets which people normally receive. This project is in partnership with The Space in Govanhill who have volunteers distribute food to local families and fresh vegetables are also sent to the Glasgow South East Food Bank. 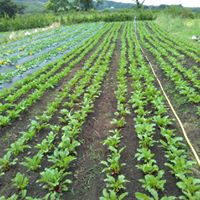 Locavore covers a very small area of land in the great scheme of things but reaches widely in terms of education around food production and the food network. They have enabled the ecological agriculture through creating a market for their produce via their shop and veg box scheme and creating a sustainable business which can afford to lease farm land in an urban location. They have aspirations that their portion of the market is strong enough to enable taking out a mortgage to buy a larger area of land in close proximity to Glasgow. Their plans to develop a large grocery store are intended to support this growth.

It is informative that Locavore have not had trouble in finding suitable land for ecological agriculture or in affording the rental charges for the land. The primary issue has been creating a market for the produce. Locavore established the market first and can only establish the growing element due to the stability of the organisation as a whole. Locavore has operated at a small profit each year which has been invested back into the enterprise. Despite minimal profit they employ 13 full-time equivalent staff and have a wide-reaching educational impact. This provides an interesting case as they have enabled new entrants to agriculture to become skilled and established by providing the growing opportunities and the market for the produce whilst maintaining a strong social focus. They are directly challenging the dominance of supermarkets over the food chain, and emphasising how changes need to come from throughout the food network.