Caicocci , the story of a social custody 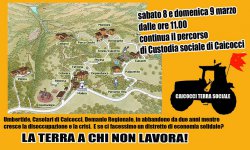 In the fall of 2013, the grassroots movement Caicocci Social Land Committee was born to raise the issue of the future of Caicocci – a neglected public estate in the centre of Italy – against its privatization and with the aim to return it to the community and in order to stop the government structural neglect of public assets.

Caicocci is a public estate owned by Umbria region, situated a few kilometers from Umbertide (Pg). It consists of 190 hectares of woods , pastures and arable fields as well as 13 houses , all habitable. Managed for years by the company “I Casali”, with exclusively tourist purposes , it was in a total state of neglect since 2012, following the notification of the order for eviction from the Region. The Region then opt for the sale and privatization of the good – according to the decree “Decreto sulle Liberalizzazioni” (Decree on Liberalization) issued by the Italian government in January 2012 led by Mr. Monti which ruled for a systematic sale of the State’s assets in order to cover the increasing public debt.

Caicocci Social Land Committee was composed by about a hundred people coming from different associations (Terra Fuori Mercato, Colibrì, Legambiente, Slowfood, Genuino Clandestino, Panta Rei, Ecodem) and many citizens. The Committee started by organizing peaceful demonstrations asking local government to revive those lands through a participatory and horizontal management, giving the possibility to inhabit the houses and work the farmland, in line with the true vocation of the estate: agriculture.

Following the demonstration, the project of the "social custody" started. With it, the Committee took charge of the estate, against its decay, neglect and acts of vandalism, trying to create individual and collective projects with the aim of creating direct and indirect benefits for the entire territory. In a few months the “custodians” launched a library, began to create social moments to share ideas with the local community and approached the first agricultural work. They experimented the "rural school" and reactivated the former bar as a meeting place. They collaborated with the Faculty of Law of the University of Perugia in the project "Law Clinic" (which addressed the legislative and legal aspects of social custody in the management of a common good). Caicocci also hosted the national meeting of the campaign "Land Common Good", which was attended by about 200 people from all over Italy. All this with the goal of giving a new momentum to peasant agriculture, have affordable and natural products and return decision power over the management of a public good to the citizens through participation and direct action.

Just one year after the occupation, the first legal charges. The Region demands the return of the property and compensation for alleged damage to the buildings notwithstanding the - then - mayor of Umbertide, Marco Locchi, stated its support the idea of a different solution for the management of the estate – other than just selling – underlying the importance of its productive and social use. However, the Umbria Region was immovable. The occupants defended themselves from the legal charges and got the first judicial successes, immediately followed by the local authority appeal.

Eventually, in December 2015, Caicocci Social Land Committee was dismissed for organizational reasons as well as for the poor attendance of the territory and the small presence of human capital remained to support the project. The legal consequences are today still pending: the court ruling is heavy and the activists speak of a political verdict where social custody is dismantled by defining all simply as violent occupation for personal purposes , disregarding more than two years of efforts , grassroots participation, ideas, proposals and requests for a dialogue with the local authorities.