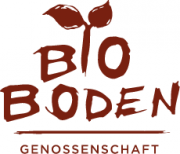 The BioBoden cooperative was established in April 2015 to secure more land for environmentally friendly agriculture which conserves resources. It acquires land as well as enterprises which are for sale and leases them to organic farmers on a longterm basis at an affordable price. At the same time BioBoden operates itself in farming and gives (young) farmers a opportunity to work as a farmer on a long term perspective. The cooperative wants to encourage as many people as possible to become involved. Everyone in the world acquires 2000m² of agricultural land. Becoming a member of BioBoden, every member can symbolically take over responsibility for at least it`s "entitled" land. With each membership BioBoden can save organic farm land, so there will be more organic farming in the future in Germany. “We see our work as acting for the benefit of society," says farmer Stefan Decke, the second director of BioBoden. "Anyone who wants to feed themselves healthily and regionally should join us as a member".