Agriculture is a key sector with long tradition in the Czech Republic as more than half of the land area (53.4%) is agricultural land. However the agricultural situation has changed rapidly over the past decades. Today, the production is based mostly on intensive and industrial farming, which operates on 89% of Utilized Agricultural Area (UAA), while the number of family farms is the lowest within the EU. It significantly influences not only the rural development but also the soil quality, and landscape stability.

Soil contamination is mainly caused by xenobiotic chemicals and heavy metals used by industrial farming. The intensive agriculture also contributes significantly to the contamination of groundwater and surface water, it has a negative effect on soil microorganisms, decreases biodiversity and ecological stability of the landscape including the increased erosion effect by creating large land units with monoculture crops. As a reaction to this situation, the interest in organic farming and its products as well as the support of Community Supported Agriculture (CSAs) and small-scale farmers has recently started to spread among Czech citizens. 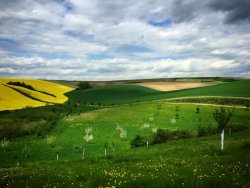 The farm structure by size class highlights the peculiar nature of the Czech agriculture. The vast majority of the UAA (89 %) belongs to a very small number of big farms (19 %), those with more than 100 hectares. This means that about 3.1 million hectares of agricultural land belonged to 4 420 farms in 2010. It leads to an unusually high average area per holding - 152 hectares per farm, - which represents the highest value within the EU. On the other hand, the total UAA is divided into 17.5 million parcels with an average area of 0.52 ha reflecting the extreme ownership fragmentation. 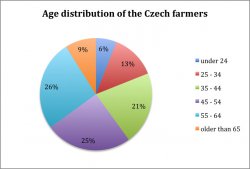 There is not shortage of young farmers in the Czech Republic and most of the family farms already have their successors. The Czech Republic is involved in the project called:“Farm-Success: training farmers for sustainable succession processes.” The project aims to provide young farmers with tools and knowledge needed for succession processes in family farms. The main challenges of the succession process in family farms are the high administrative and legal burden. Other problems of family farmers are low protection of their agricultural products and troubles with payments. There are also concerns expressed by family farmers which do not affect corporate farms: difficult access to bank loans and lack of a processing capacity.

In 2015, the main types of agricultural crop production were grains (such as wheat, barley and corn) which covered 59,7 % of UAA. Another important agricultural products are sugar beet, potatoes, oilseed rape and hops. The fruit production is recently slightly growing and the main types are apples, pears, apricots, peaches, plums, cherries, strawberries, currants and walnuts. On the other hand, the vegetable production is decreasing and the main types are onion, cabbage, pea, carrot, cauliflower, kohlrabi and pickling cucumbers. Czech farmers breed mostly cows for milk or meat, pigs, sheep, goats and chickens. There is also significant amount of products from fishery and beekeeping. In 2015, the Czech Republic exported the agricultural goods and food stuffs worth more than 178,5 billion Czech crowns but there was also even bigger import of goods and food worth 196,5 billion Czech crowns. 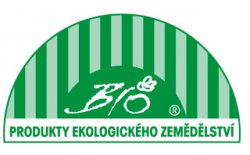 Despite the huge amount of land used mainly for conventional agriculture, the Czech Republic has the fourth highest proportion of ecological agriculture. In 2014, the organic farming were applied on 12% of the UAA operated by 4 388 farmers. Organic farming has its own law, which came into force in 2001 and it also has a national organic logo.

With the mandatory use of the organic logo of the EU, the two logos (national and EU) communicate the same information to the consumer. Therefore, it was decided that a national logo should be used only for domestic Czech organic food production.

There is an increasing demand for local high-quality food in Czech Republic every year. The number of farmers selling directly to consumers through short supply chains is growing. The on-line database of farmers: Adresář farmáře contains more than 500 contacts of farmers selling directly to consumers. Accordingly, a new alternative system of producing and buying of food – community supported agriculture – is being established. There are about 30 CSAs groups so far, which either already successfully operate or are seeking members or a farmer. Some well-established CSAs have been in the direct agricultural market for several years, the first CSA was established in 2008. The majority of CSAs belonged to the informal network of local food initiatives, although a formal network of CSA was established in 2015 due to the activities of AMPI. CSAs are unevenly distributed within the country, particularly concentrated in big cities such as Prague, Brno and Ostrava.

The development of agricultural land use 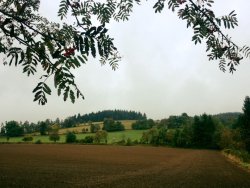 The greatest problem for land use protection is land take and soil sealing. The conversion of farmland to urban uses represents a very serious problem. On arable land in particular, there is a trend of soil loss (approximately 9100 ha/year), which means approximately 25 ha/day, or an area equal to 40 football pitches per day. The soil is destroyed irreversibly. The main reasons are economic, because many landowners who do not farm prefer an immediate profit from the land. This situation is caused by the expansion of built-up areas, specifically the increase of acreage of residential and industrial zones. There is also increased pressure on land use changes by biofuel production. The main feedstock used in its production is sugar beet, corn, and wheat. The production of biogas increase not only the amount of biogas stations but also corn fields in unsuitable conditions which has a negative impact on landscape stability by increasing soil erosion and disturbing the water catchment areas. In the Czech Republic, GM maize has been grown since 2005, when the area began on 150 ha. In 2015, the total area grown on ​​997 ha but compared with 2014, there is a rapid decline in the number of growers - from 18 to 11. It is mainly due to voluminous administrative (registration, labeling, waste production) and the necessity to follow the rules of coexistence of neighborhood crops. Another cause is a negative media coverage about GMO issues. 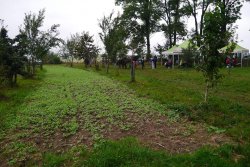 Agricultural practices used on agricultural land are significantly influenced by the extremely fragmented land ownership, especially reflecting the historical development of land tenure system. The land tenure situation in the Czech Republic is similar to the situation in other post-communist countries. The collectivization of agriculture began in 1948. Individual land ownership was not generally abolished as the owners remained in the land registers but the use rights were given under pressure by many owners to the state and cooperative farms. After the revolution in 1989, the land was restituted to the former owners. This move has resulted into the huge ownership fragmentation, which did not correspond with land use fragmentation. This situation did not endorse owners to start farming anew. The parcels often were with unfavorable sizes and shapes, usually unidentifiable as a part of huge production blocks, without road accessibility. These parcels were thus not economically viable for sustainable small-scale farming and owners rather decided to rent their land to agricultural businesses. Moreover, this situation was supported by the fact, that the owners lost their interest in agriculture and did not pass their knowledge to next generations. Therefore the Czech agricultural landscape pattern remained consolidated into the huge production blocks and this landscape structure lasts until today.

Consequently, the Czech agriculture is based on the tenancy system - more than 80% of the agricultural land is rented, which is the highest share of rented land within the EU. The indicated ownership fragmentation and huge rented production blocks has resulted into situation; which is called the Farmland Rental Paradox, when very small parcels tend to create large production blocks by being rented to large farmers, and therefore significantly homogenising land-use pattern. It affects up to 40% of agricultural land in the Czech Republic. In order to alleviate such huge ownership fragmentation and support rural development, the land consolidation processes have been carried for more than three decades already. Currently, the land consolidation processes are the only tool which are able to deal with farmland structure by creating economically viable and accessible plots for farming. Unfortunately, it does not effectively revitalize the social and economical aspects in rural areas as the majority of the owners do not return to the agricultural sector and it does not support the land accessibility for new entrants or additional land acquisition for small-scale farmers.