France is one of the main agricultural countries in the EU. The conventional agricultural model, promoted for decades, is now in a stalemate. Agroecological forms of farming and local food systems are on the rise, albeit still a minority. In this context, access to land is a major obstacle both to the transition towards more sustainable agriculture, and to the entry of a new generation.

In the wake of Word War II and in connection with entry into the European Economic Community, France invested heavily in the modernisation of its agricultural sector. It sought to develop food production, based on the model of modern, "human-size" family farms. Like in many EU countries, it meant mechanisation, intensification and specialisation. It also meant supporting the consolidation of family farms in terms of equipment, skills and land.

France did become a major agricultural power, but the model of modern, human-size family farm is at an impasse.

A major but declining agricultural country

France is the first country in the EU for the size of its agricultural area: 29 millions hectares of agricultural land (2010), i.e. over 50% of the territory.

Agriculture, fisheries and sylviculture represent 1.5% of the GDP (in regular decline since the 1980s, mostly due to the downward trend in agrcultural prices). It is a net agricultural exporter, down from 2nd to 5th position worldwide.

About 1 million people are doing regular farmwork (2010), i.e. 3% of the working population. This is more than in many Western European countries, but there has been a rapid decline in the farming population (divided by 3 in 30 years).

A post-war model of family farming, disrupted by concentration and ageing

France still has nearly half a million commercial farms (2010) - i.e. comparatively much more than Germany or the UK, which have about 300 000 farms.

The number of farms is rapidly falling: there were 2 millions in 1960, about 1 million in 1990 and only 490 000 left in 2010. Most were taken over by existing farms, others turned to non agricultural uses or are left abandoned.

Most of the farms that have disappeared are small farms. A new phenomenon is that, since 2000, medium-size farms have also declined in numbers. The only category that is still increasing is that of large and very large farms (above 100ha).

The farming population is aging: 38% of farm holders are above 55, only 9% are under 35. According to a national study conducted in 2007, less than a third of farm holders above 55 knew who would be their successor... The issue of generational renewal mostly concerns small and medium-size farms.

Agriculture - the rise of organic agriculture and direct marketing 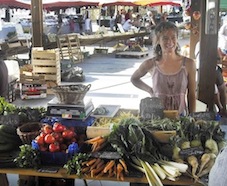 Since the 1990s, "alternative agricultures" - organic, multifunctional, community-connected - are on the rise in France. The organic sector is only slowly rising, and does not meet yet public demand. Multiple forms of direct marketing and short-supply chains have developed. They are now used by a significant number of farms, and contribute to the development of local food systems. Civic mobilisation and community connections are often a key component of these new agrofood systems.

The consumers’ market (individual and collective) has doubled since 2007 (from 2 to 4 billions). About 25% of organic food is imported.

Organic agriculture is correlated with other features of alternative agriculture: 1 out of 4 organic farmer practices on-farm processing; 1 out of 2 sells farm produce through short supply chains.

7% of all food bought in France is bought through short supply chains.

Community-supported agriculture is very developed in France. The main form – AMAPs (Associations pour le maintien d’une agriculture paysanne) – creates direct consumers-producers relations. It is based on consumers’ pre-payment of a share of the annual production, which is regularly (usually weekly) delivered to them as a box of products. In 2012, there were 1600 AMAPs, gathering 50 000 families and about 200 000 consumers.

Taste for local, quality food and a sense of connection with the farming world and countryside are still comparatively strong in France, which constitutes a good basis for all forms of community-supported agriculture. 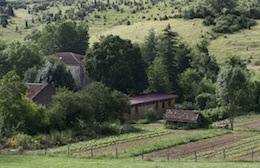 In France, access to land has become a major obstacle to the development of alternative agricultures, and to the entry of a new generation of farmers. The first challenge lies in the rapid decline in agricultural area, mostly due to urban pressure. A second challenge consists in the intense competition between agricultural users, which results in land concentration on large, specialised farms and hampers the entry of new farmers, particularly newcomers.

France is losing agricultural land at a fast pace since the 1960s. About 110 000 hectares (i.e. about 7 times the area of Paris) are lost every year. The trend has accelerated since the 2000.

Most land (80 000 ha/ year) is taken over by urban development, commercial areas, infrastructures, etc. The rest (mostly in remote mountain areas) stops to be used for agricultural production and is progressively taken over by bushes and woods.

Urban and infrastructure development is particularly problematic as it largely impacts the most fertile land (historically close to large urban centres) and as it is not or little reversible. It also has major environmental consequences: soil sealing which causes erosion and floods, loss of biodiversity, acceleration of climate change. According to estimates, about 4.7 million hectares are under threat of urban sprawl.

To increase profitability, most farms seek to increase their output, and land acreage. This is the reference model for most farmers, agricultural institutions and banks. The functioning of the land market organises this land concentration.

Established farms find it easier to buy or rent land that goes on the market: they have better access to information, social network, own capital and bank loans, than new entrants.

60% of the land liberated by retiring farmers goes to land concentration, while only 40% is available for the entry of new farmers.

For generations, farms have been mainly transferred within the family, from parents to children or kin. Today, most children do not wish to take over their parents’ farm. On the other hand, a number of people, with no family background in agriculture, and often with a prior professional life outside of farming, wish to enter farming. These "newcomers" represent about a third of new farmers nationwide; in some regions, they are a majority. Despite very secure tenant farming rights, access to land is one of their major challenges.

Newcomers often struggle to find information about land available for sale or rent. If they do, they are often faced with owners/ retiring farmers who prefer to sell/ rent to a neighbour than to somebody with no prior experience, who comes from "outside" and may have a different lifestyle/ approach to rural areas.

On average, farmland costs about 5500€ in France. This is much lower than neighbouring countries. But sales and rent prices have increased steeply since the early 1990s. In many instances, the financial burden of buying land and farm buildings is such that new entrants cannot pool the funds needed (by themselves or from the banks), or will take an entire professional life to pay it back.

Many newcomers have projects which correspond to alternative forms of farming (e.g. organic production, pluri-activity, very small farm). These tend to fall outside of existing criteria or processes determining eligibility to public subsidies and land access.

News from country
New film: Land for our food
Just released! Our film The Land for our Food is a very concrete introduction to the challenge of land access in Europe and the power of communities.