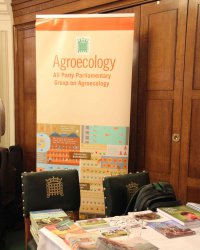 All Party’s Parliamentary Group on Agroecology

The UK’s exit from the EU means no more CAP, and in its place a whole new legislative framework for replacement agricultural support schemes including separate legislation for the devolved countries of Scotland, Wales and to a certain extent Northern Ireland.

It’s hardly a straightforward task and has been made more difficult by the upheavals that have been going on in government. So, to date we have had two Agriculture Bills before parliament. The first (2017-19) was drafted under Michael Gove’s term as Secretary of State (SoS) for the Department of Environment, Food and Rural Affairs (Defra). Gove introduced Public Money for Public Goods as the framework to be used in England to replace CAP for direct payments to farmers. There were some notable omissions from the public goods listed including food - raising an immediate complaint from the National Farmers’ Union; health; and soil - those arguing that it’s a private asset seeming to win the day.

Before though the Bill could be finalised, Gove was moved on to higher things to be succeeded last July by Theresa Villiers. Then a couple of months later a general election was called, and in October the Bill fell, only to re-emerge this January (16th) looking somewhat different (soil was in there under public goods, and there was now a requirement for Ministers to consider the need to encourage the production of food in England, in an environmentally sustainable way and to report on food security at least once every five years).

And Agroecology was there - under public goods, eligible for financial assistance. The context though in which it’s mentioned leaves the meaning somewhat obscure. It doesn’t come under the list of environmental public goods. Rather it’s mentioned under public access, the exact wording being “supporting public access to and enjoyment of the countryside, farmland or woodland and better understanding of the environment” where “better understanding of the environment” includes better understanding of agroecology”. Small wonder some organisations are concerned it means nothing more than money to go to courses in agriculture colleges. So the emphasis now turns to influencing the wording as the Bill passes through its various stages to “Royal Assent”, some time before the summer parliamentary recess. The amendment we hope to see accepted, would be listed as one of the purposes “the Secretary of State may give financial assistance for or in connection with” and reads as follows: “(k) establishing, maintaining and expanding agroecological farming systems, including organic farming.”

Most of the public goods listed in the Bill will be eligible for financial assistance under a new Environmental Land Management Scheme (ELMS) - the cornerstone of the new agricultural policy.

Proposals are for the scheme to include three ‘tiers’ of entry, enabling anyone from any farm or land type to participate at the right level.

Tier one would encourage farmers to adopt environmentally sustainable farming and forestry practices, while farmers, foresters and other land managers in tier two would focus on delivering locally-targeted environmental outcomes. The third tier would pay for larger-scale, transformational projects – such as restoring peatland.

Farmers and land managers will have 10 weeks to have their say on the details of the new scheme. This will be supported with a number of regional events across the country for knowledge sharing between farmers, land managers and foresters and Defra officials designing the scheme.The ELMS discussion document will be open for views on Citizen Space, and the future farming policy update is available to read in full on GOV.UK

Tests and trials are currently under way and as of January this year 38 are up and running and more than 30 are expected to follow. The plan is to run a major national pilot in 2021 to test possible approaches at scale, with a view to implementation from 2025.

In the meantime, the government has committed to continuing funding at 2019 levels for every year of the current parliament, and by 2028 when all other basic payments are ended Defra plans to have up to 82,500 of England’s farms enrolled - i.e. much more ambitious than the existing countryside stewardship agri-environment scheme which after four years has only around 29,000 farmers on board.

Needless to say, the introduction of such massive changes is not without its problems and its critics, not least of which was the National Audit Office which in a report last June stated: “Implementing the new agricultural policy will be complex, difficult and high-risk, and Defra has a lot to do to prepare.”

No sooner though had Theresa Villiers announced the second reading of the Bill (February 3) than she was removed from office thereby carrying the record for the shortest term as SoS for Defra - a mere seven months), and in came a familiar figure, George Eustice previously Minister of State 2015 - 2019 and a resolute Brexiter. No-one is holding their breath.