The annual Oxford Real Farming Conference (ORFC) is one of the largest gatherings in the UK of farmers, campaigners, researchers and anyone with an interest in making the food and farming system work for people and the planet. Over 800 people made their way to Oxford Town Hall in the first week of January to take part in over 50 different workshops, panel debates and seminars covering a myriad of issues, from practical advice for farmers to political debates and technical seminars.

This year there was a strong thread running through the conference on access to land, with the Access to Land European network hosting several sessions on the issue. Given the high price of land, a particularly acute problem in England, a focus on smaller farms makes sense, especially for those starting out in farming. The ORFC session ‘Defining Peasant Agriculture’, drew on these discussions within the network around the role of small farms in Europe today, with speakers from Germany, Romania and the UK. The session drew attention to the very different contexts between countries, with peasants all but disappeared in Germany and the UK, and the word often used pejoratively, while in Romania there is a strong peasant culture and foundation, though it is under threat. 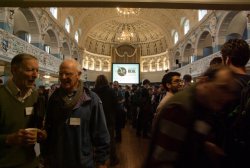 The ORFC was also the setting for a preview of a new documentary, ‘Land for Our Food’ which explores the different experiences of agroecological farmers finding land for food production. The film features farmers from across Europe, some of whom had come to Oxford to attend the event. The film also featured British journalist George Monbiot, who has written extensively on land rights in the UK, and who was able to come and answer some questions at the end. The audience, drawn largely from UK residents, expressed interested in hearing that the struggles they face finding land have an echo in other countries across Europe. It was also useful to be able to share experiences, and more importantly, possible solutions.

The final session of the day looked at local authorities, and the role they can play in helping secure land for food production. Chaired by a member of Oxford City Council, the session heard from Charles Coats, who has a wealth of experience in managing and advising on local authority-owned land. He outlined the UK’s county farms programme, which is largely in decline, with councils selling of the land they do won. Bonnie Hewson also presented the work being undertaken in Bristol to match land available with those seeking land. The session showed that while local authorities have a range of tools at their disposal to facilitate land access, they will often need advice, expertise and pressure from citizens before they use them.

There were also several other discussions on land that did not originate from the European network (highlighting once more how central the issue is to those at the conference). The Landworkers Alliance (a UK branch of La Via Campesina) organised a session of the history of land rights in England and the role of housing in pushing up land prices, and a further fringe discussion on land reform. Another session heard from large landowners, such as the National Trust and the Duchy of Cornwall (55,000 hectares owned by Prince Charles), who presented their plans for the future and were questioned as to how they could help a new generation onto the land.

The ORFC is aimed at a wide and diverse audience, with many established farmers attending with open minds to hear new techniques and ideas. A key component though are newcomers to farming interested in pursuing a career on the land. For this group, while discussions of farming practice, economics and politics are all very relevant there has often been one key barrier holding them back - access to land. Innovative and radical models of land ownership and tenure may offer the only real opportunity to these newcomers, given the high costs of land and the relatively low incomes that can be earned from working it. The ORFC 2016 gave a flavour of some of these ideas and models and judging by the levels of interest and enthusiasm, we are likely to hear a lot more about land in the coming months.