Preserving land for local, agroecological farming is a growing issue in many parts of Europe. The amount of agricultural land is declining, as a result of urban and infrastructure development. Competition for land use is also growing, between farmers food production and other uses (timber, biofuels, fibres).

As a result, farmland is ever more concentrated on large, intensive farms while small farms are disappearing. This is despite the fact that small farms are the cornerstone of European food security and key to maintaining a living countryside. They also , remain best placed to provide quality local food and preserve the environment. At the same time, the retirement of an ageing population of farmers, and increasing difficulties finding new entrants to replace them, may result in further abandonment of rural areas.

The Access to land network brings together grassroots organisations from across Europe to share experiences and promote the significance of access to land for agroecological transition and generational renewal. Established in 2012, it functions as an informal network of about 15 organisations.

– Share experiences, ideas and practical tools to support farmers in accessing land and engaging in good land stewardship
– Connect exisiting grassroots initiatives and support the emergence of new ones
– Raise awareness of land issues, land as commons and grassroots initiatives among citizens, consumers, farmers’ organisations, civil society organisations and policy-makers
– Network with and support other civil society organisations and social movements working on these issues

Learn more about what we do.

Our members are field-based organisations from a range of Western and Eastern European countries. Some are focused on land while others have a broader scope. All are directly working with farmers and communities, and consider land as a common good.

To pursue their goals, they have various approaches:
– Advising and supporting farmers and future farmers in their search for land
– Acquiring land, based on public and private investments and donations, and renting it to farmers via community farmland trusts and similar initiatives
– Making agreements with landowners in order to provide land on favourable terms to farmers,
– Preserving farmland and farm ecosystems
– Advocating policy change
– Offering educational activities to citizens and other civil society organisations

Our network has already been successful in a number of ways:
– Consolidating existing organisations, through field visits (15) and experience-sharing activities, involving about 120 people from our organisations and partner organisations
– Fostering the development of new initiatives, such as Terra Franca (Catalonia), De Landgenoten (Flanders), CooLAND (Czech Republic) or the Scottish Farmland Trust (Scotland)
– Producing practical resources and communication materials about access to land in Europe, most of which are available on this website: directory from 60 organisations, including country analyses, case studies, mapping of 30 good practices, video The land for our food, quiz, etc.
– Raising awareness about access to land issues and experiences in Europe, through public presentations (over 50 reaching about 4000 people), and networking meetings with other civil society organisations
– Presenting a petition to the European Parliament, together with Via Campesina Europe, calling attention to access to land, land concentration and land preservation in Europe. 70 national and European organisations signed the petition.

How to become a member?

Our network was initially established as part of a European-funded partnership for experience-sharing on access to land. We have now decided to enlarge the network by including new organisations interested in joining. If you are interested, please contact us through our contact form. 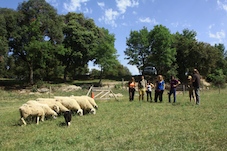